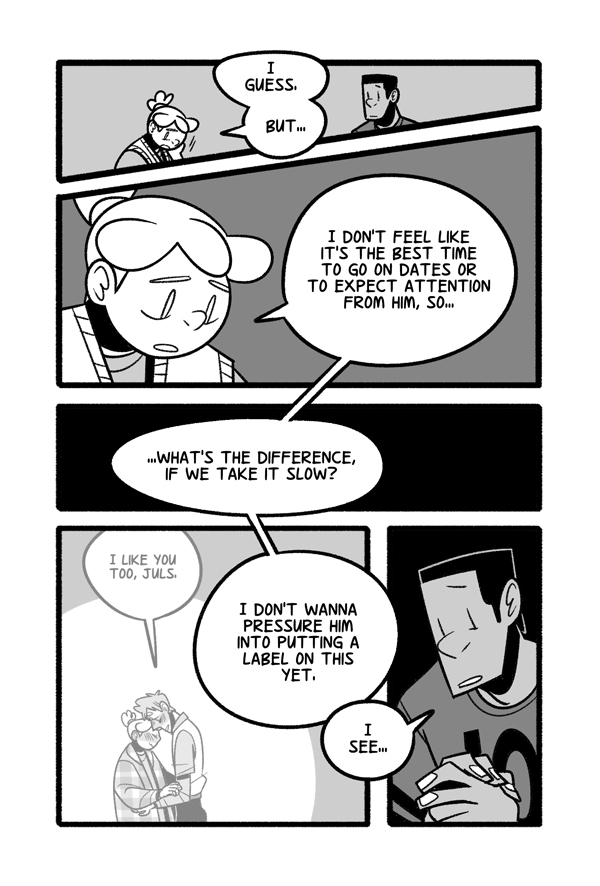 Julian feels pretty confirmed that Landon likes him (as per flashback panel from ch 27 extra 11), so he doesn't feel like he has to press Landon for anything further at this exact moment. I'm working hard to explain this succinctly in webcomic format, so I'm hoping I'm doing an ok job......!!!!

Thank you so much for all your thoughtful comments throughout this conversation, I appreciate the time and effort you take into reading TINF <3 Isaiah has always had good intentions with his concerns, but in the past he expressed himself too quickly without fully understanding the other perspective first, so his tone could be read as reprimanding, even though that wasn't his intention. Some bigger examples are with his gf in ch 24 and Landon in ch 27, but he's consistently expressed concern throughout the comic, ex ch 13 (1, 2).

Communication (to be clear: I'm only commenting specifically on healthy and/or thriving relationships) is so important because: 1) it's necessary to realize when the people who cherish you are showing concern for your safety even if they're going about it incorrectly, so they need a space to properly explain themselves and 2) to those outside of your perspective, you might seem to be making rash decisions that are putting you in danger physically or emotionally. Always kindly stick up for yourself and communicate clearly to reassure them, out of respect for yourself and your loved ones!

At this point, Isaiah's character has grown, and he's making an effort to understand, which is why he's asking so many questions. Neither Julian or Isaiah know that Julian is demi, so this conversation is very important for the both of them to begin understanding that Julian perceives relationships differently. By the end of the convo, I hope I can make Isaiah's intentions clear! Over on patreon, we've started the last part of this Isaiah/Julian scene, so I'm excited to end it soon LOL !

next 2 thumbnails here and here!